Because of my 17 day diet experiment it seems like my latest writings have demonized food. Food is not an evil thing – in fact it can be amazingly beautiful. So I bring you this blog post, a deviation from the past few, to tell you a story.

I am not one to have regrets in life, but, I have two. One of which is that I did not study aboard during college (the other I’ll save for another blog post). I love traveling, learning about cultures, and I pride myself in becoming as socially aware as possible. Luckily, I have been able to find a “work-around” for this regret. This regret is one of the many reasons why in 2009, I volunteered as a civilian for a deployment to Iraq. As much as I benefited from my trip to Iraq professionally, I was also able to accomplish many of the things I hoped to accomplish in a study aboard program. I became more independent, learned about Middle Eastern cultures, enhanced my appreciation for the US, and even learned a couple of words of Arabic – which unfortunately I’ve mostly forgotten.

During my deployment, I was part of a task force that investigated and prosecuted cases of contract fraud and public corruption related to US spending in Iraq, Afghanistan, and Kuwait. In addition to this task force, there was another whose primary role was to work with local Iraqi investigators and interpreters and assist them in conducting investigations. Although, I was not assigned to this task force, I took every advantage to tag along and work with the Iraqis. My memories with these individuals are my most cherished from the entire six month deployment. One particular experience stands out to me. The Iraqi investigators and interpreters were hosting a going away dinner party for an American investigator that worked with them for over a year. An unbelievable feast of fish, hummus, grape leaves, and other local fare was prepared by the wives and mothers of the male Iraqi investigators. Even though the women prepared the food, they were unable to join the party. In the Iraqi culture, after females reach adolescence it is no longer appropriate for them to socialize with men who are not relatives. So here I am, a female, getting to participate in this wonderful feast but the women who prepared it were sequestered to another room.

My favorite part of this story (yes, stick with me – there is a silver lining) is the American investigator that was leaving was female and her role was not only to supervise all of the American investigators on the task force, but also the Iraqi ones. The Iraqi investigators were visibly upset that she was leaving and it was apparent she was respected by them. All of the Iraqis pitched in and purchased her a beautiful gold necklace. I felt sad for the women that were confined to the kitchen, but at the same time I was so proud of these men for accepting this woman and allowing her to demonstrate the role woman play in our culture. And maybe, just maybe, these men will start viewing their mothers, wives, and daughters in a whole new light.

I close by saying, those Iraqi women made the best hummus I’ve ever had.

For obvious reasons I can’t post pictures of my Iraqi friends. But I’d be remiss not to showcase the amazing food. 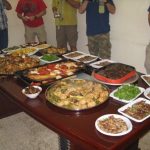 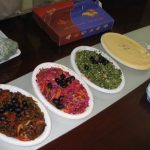 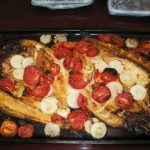 2 Responses to “Iraqi women make the best hummus ever”